It's just a week until Christmas and it appears that one Hollywood star has decided to grow a white goatee, perhaps in a nod to Father Christmas.
Pierce Brosnan,59, was seen showing off a spot of light coloured facial hair as he shopped in Malibu.
As well as the festive facial hair, the former Bond star was sporting greying locks as he strolled in the sunshine in casual clothes.

The name's Father, Father Christmas: Pierce Brosnan was seen sporting a bright white goatee as he went shopping in Malibu
The British actor may well have been stocking up on some Christmas gifts.
Brosnan starred as James Bond in films from 1995 until 2004.
While Pierce's best known role is playing the secret, his last film saw him turn all emotional for a romantic role.


Too much beard for Bond: The 59-year-old actor looks almost unrecognisable now compared with when he stared as a secret agent

Whistle while you work: The 59-year-old star was wearing a pair of chinos and a sports jacket for the shopping trip
The actor plays a widower who meets, and subsequently, falls for a hairdresser in Love Is All You Need.
Brosnan's next film is A Long Way Down starring Toni Collette and Rosamund Pike.
The film will hit cinemas in 2013.

Out and about: Later in the day Pierce was seen with his wife Keely Shaye Smith


Two Malibu couples -- Pierce and Keely Brosnan and Richard and Liane Weintraub -- will host a fundraiser next week to support the Malibu Ballet and Performing Arts Society's Nutcracker Ballet.
The event is set for 7 p.m. Wednesday, Nov. 28 at an undisclosed Malibu estate, according to the invitation.
The night will feature performances by Maria Newman, Scott Hosfeld, the Malibu Coast Chamber Orchestra and Nikki and Ethan White of White Tree Fine Art. Special guest tWitch from "You Think You Can Dance" is also slated to attend.
The Malibu Ballet and Performing Arts Society brings 500 students each year from disadvantaged schools to a free performance of The Nutcracker at Pepperdine's Smothers Theatre.
Tickets to the fundraiser, which are still available, range from $175 to $5,000 a person and can be purchased by calling 310-924-5891. The address for the event will be provided upon RSVP.

Pierce Brosnan and Aaron Paul, together in 'A Long Way Down'


November 10, 2012
Veteran actor Pierce Brosnan and the acclaimed co-star Aaron Paul of Breaking Bad just recorded together A long way down, a comedy which finished shooting last October in our country and whose release is planned for fall 2013.
Picture of the filming of 'A Long Way Down' in Palma de Mallorca.

The last October were shot at Palma de Mallorca the last sequences of the British comedy A long way down, based on the novel by Nick Hornby and A Contracorriente Films released in Spain in autumn 2013.
A Long Way Down is directed by Pascal Chaumeil, the director of the seducers and A parfait Plain and has a star cast with familiar faces like Pierce Brosnan, Toni Colette, Aaron Paul (recently Emmy-winner earning the second-by the series Breaking Bad), Imogene Poots, Sam Neill and Rosamund Pike.
The film is based on one of the most popular novels of Nick Hornby, author of 'High Fidelity' and 'About a Boy', in Spain entitled 'dive'. It is a bestseller with more than 1 million copies sold in the UK and translated into 17 languages​​.

A Long Way Down is a comedy that puts us on the eve of New Year, on the roof of a skyscraper in London to coincide Martin, Maureen, Jess and JJ to end his life. Instead of jumping, strangers make a pact to stay alive until Valentine. And so, on the day we all had to end, their friendship starts and has overcome all obstacles together. The adventures of this motley crew are exciting, unpredictable and genuine affirmation of life.


OCTOBER 25, 2012
Here’s your first look at A Long Way Down, directed by Pascal Chaumeil, a frequent collaborator with Luc Besson whose directorial debut was 2010’s Heartbreaker with Romain Duris and Vanessa Paradis. A Long Way Down is a dramatic comedy based on the novel by Nick Hornby (About a Boy, High Fidelity), in which four people meet on top of a London skyscraper on New Year's Eve and form a surrogate family to help one another weather the difficulties of their lives”. They had all intended to commit suicide by jumping from the building, but forego that plan and decide to live and help each other instead.
The film boasts a very impressive cast that includes Pierce Brosnan, Toni Collette, Sam Neill, Rosamund Pike, Imogen Poots and Aaron Paul (who replaced Emile Hirsch). We have pics from the set as they film at Camp de Mar in Spain.
We can expect A Long Way Down sometime in 2013, although as of now it only has a confirmed release for Sweden in September. We’ll keep you posted. Enjoy the pics!


Licence to Splash: Pierce Brosnan shows off his fun side as he dunks co-star Toni Collette in the sea during filming
23 October 2012

During his years as the ultra suave James Bond, Pierce Brosnan appeared calm and collected, never letting his demeanour slip.
But now he is free from the super spy role the British actor seems to be finding his fun side.
The 59-year-old was spotted shooting his latest movie, A Long Way Down, in Mallorca, Spain, on Monday.

Splashing around: Former Bond star Pierce Brosnan shows off his fun side while filming new movie A Long Way Down on a beach in Mallorca
He was seen getting into a much different character as he larked around with his co-stars and giggled with delight as he splashed around in the sea while fully clothed.
Pierce even dunked actress Toni Collette's head in the water at one point as he splashed around with a large grin on his face.
He wore shorts and a red short-sleeved checked shirt as he ran into the water.

Take that! He threw himself into character as he dunked co-star Toni Collette in the sea while they were both fully clothed

Having fun? Pierce looked ecstatic as he ran through the water in his shirt and shorts on Monday

You call this work? The former 007 has spent this week on the Spanish island filming more scenes for the upcoming movie
Once he was fully immersed in the sea, Pierce then jumped up and down as Toni joined in the fun.
She was also fully dressed as she had her head and body put under while wearing a dress and cardigan combo.
Brosnan was later seen drying himself off with a towel and enjoying some more leisurely time as he sat on a sun lounger.

Back on dry land: As soon as the splashing scenes were over he grabbed a towel to dry himself off once the excitement had ended

No longer his target: Toni Collette also dried off after getting dunked by her male co-star

Heading back in: Brosnan looked serious once more as he got back out of character and the cameras stopped rolling
Taking some time out form filming, he ensured he was protected from the Spanish rays with a hat on his head and sunglasses over his eyes.
Cutting a much more serious figure, the actor looked on as he enjoyed his surroundings.
Only a day earlier the 59-year-old was spotted with a much more worrying look as he displayed a painful looking black eye.

Hard day at work: The actor spent Monday afternoon on the beach and in the sea as part of the movie schedule

Grinning: Toni was also on set for the whole afternoon as the film slowly comes together
The former 007 star's left eye was noticeably black and blue.
However, fans of the actor can breathe a sigh of relief - it was just make-up for the same film.
He flashed a wide grin to photographers as he got into a car after filming for the day finished, seemingly forgetting he was still sporting his bruised make-up.
A spokesperson for the actor told MailOnline: 'The black eye is not painful. It is movie make-up. Pierce was shooting a fight scene on Long Way Down.'

Dried off: Pierce wore a flat cap as he later took a stroll around the shore covering himself up from the sun

And relax... Brosnan rested on a sun lounger for the rest of his day dressed in the same outfit
The film, based on Nick Hornby's book, also stars Breaking Bad's Aaron Paul, and revolves around four people who make a pact to kill themselves on New Year's Eve'.
The 007 actor was making the most of filming in Mallorca.
He was also spotted enjoying a game of golf on Monday.

Cameras rolling: Collette headed to the director's chair to see the outcome of the filmed scenes

Eyeful: Pierce showed off his tough side as he emerged on set with a fake black eye courtesy of the make-up department
0 Comments 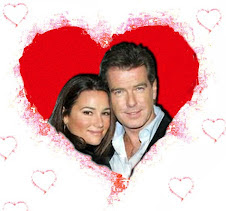 Have you ever met Pierce Brosnan?